When Hala Hussein knew she was moving to Canada, she bought herself a pair of running shoes.

“This is not my style, since I was a youth, I wasn’t using sport shoes,” says Hussein, 48, who came to Edmonton as a refugee in February of 2018. “But when I come here, I know I need to be more active.” 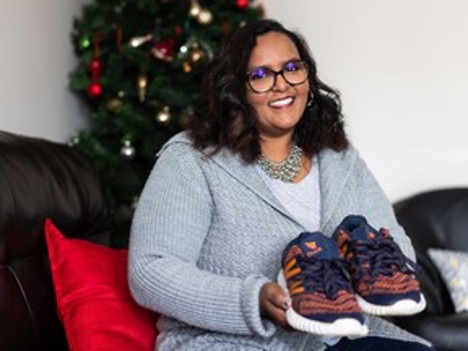 Hala Hussein poses for a portrait in Edmonton, on Wednesday, Dec. 16, 2020. Hussein is in a Workshop West project called The Shoe Project, which is storytelling by new Canadians who are invited to see their immigrant or refugee experience through the lens of a shoe. Photo by Ian Kucerak/Postmedia

Canada is a big place, and Hussein knew she might not have a car. There might be long distances to cross by foot, even within a city with public transit, to get from English classes, to volunteer work, and home.

“I was pretty sure that for the first and second year, I will go many places and I guessed right,” says Hussein, the mother of five children between eight and 22.

“The shoe is still with me, and it’s still not bad. I sometimes feel shy because it has some holes. But I keep it for memory. It’s special to me.”

Hussein’s shoe story is just one of many from The Shoe Project — a writing and performance program at Workshop West for women who are newcomers to Canada. Under the tutelage of local playwright Conni Massing, 12 women from countries including Syria, Ukraine, Colombia, Iran and China, are gathering over 10 weeks via Zoom to share and craft their shoe stories. A public performance of the result will happen March 13 and 14, timed to coincide with Skirts Afire theatre and multidisciplinary arts festival. (It’s hoped the shoe show will be live, and physically distanced, but even if that’s not possible,

Started in Toronto almost 10 years ago by Edmonton-born novelist Katherine Govier, The Shoe Project has bubbled up in cities from Vancouver to Halifax. This is its first outing in Edmonton; recruits were gathered at places like Norquest College and the Mennonite Centre for Newcomers.

One goal is to give audiences a glimpse into a part of the Canadian experience that doesn’t get much attention. For the women involved, it’s an opportunity to share their stories while receiving writing and performance coaching, plus language support.
Workshop West artistic associate Amena Shehab, who was involved in selecting participants, says that she and artistic director Heather Inglis looked for diverse, creative participants.

“These are 12 women of different colours and backgrounds, but with one story,” says Shehab, who came to Edmonton as a refugee herself in 2013. “None of us moved here because our world was beautiful and pink and flowered. There was war, fleeing home, different reasons…

“It’s powerful to see these women from all over the world. It’s a beautiful energy.”

For Hussein, the benefits of The Shoe Project are vast. For one thing, though she has a social work degree and worked in that capacity throughout her adult life, she’s a writer at heart. Stories swirl around her head. They wake her up at night.

“If I don’t write it, I can’t sleep until I write something,” she says. “This is a gift, but sometimes it makes me tired.”

The chance to craft her shoe tale, and to present that story live with other women, is thrilling to Hussein, and it feels like something is opening up in her life. While she expresses her gratitude for being in Edmonton, it’s also true the journey has not been easy. A native of Nubia (a region that’s south of Egypt and north of Sudan), Hussein and her family (all Arabic speakers) were forced out of their region, run by a strict Islamic government, after they converted to Christianity.

The last few years have been hectic. Hussein had to learn English, and now she is pursuing a social work diploma at Norquest. Her husband, Magdi Hussein, an accountant by training, is studying for his local certification. Their children went to an American school in Egypt. With fluent language skills, they have settled in well.

But it’s harder for Hussein. She’s starting over at mid-life. She misses the confidence that came with having a good career, and she knows that because she’s not entirely fluent in English, some people may think she’s not as smart as she really is.

“I miss being social, because I don’t know many people here. I miss to be among people and talk freely and express myself well, and know that people understand me naturally, without trying.”

To be with The Shoe Project participants, even via Zoom, has been liberating for Hala.

“It was a very nice opportunity, because I am alone at home during the pandemic, studying and taking care of my kids. So this is something very special to have.”

Looking forward to 2021 in Edmonton theatre