CANMORE – Ten women are about to share 10 stories through a pair of shoes.

The project, in its 10th year, is a writing and performance workshop for immigrant women who tell the stories of their journeys to Canada. 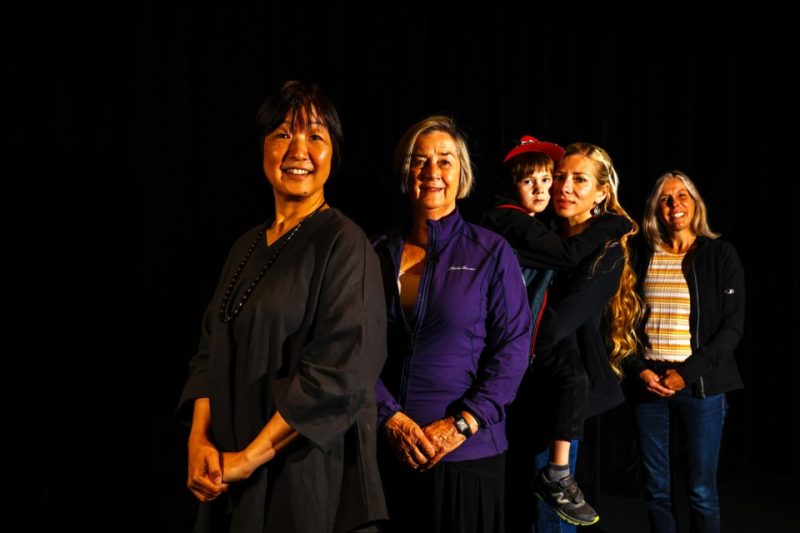 “The goal of the Shoe Project is ultimately to empower women in a more vulnerable position of maybe not feeling at home here, and so to allow them the opportunity to gain that confidence and strength that is so important,” said writing mentor Helen Rolfe. “The sharing of that empowerment and also the sharing of cultures with the community only strengthens our community.”

In October 2020, 10 women from Italy, Mexico, India, Japan, Chile, Philippines, Colombia, Ukraine and Brazil were challenged with telling their stories as new Canadians in 600-word stories, using a pair of shoes to capture the essence of their stories.

“We don’t usually think about our life through a pair of shoes, but as you start to pare down your storytelling through a pair of shoes – when you maybe have a closet full of shoes…to try and find meaning in your shoes seems a little abstract, but it is incredible how that can become a vehicle for a story,” said Rolfe.

One of the women, Antonina Natalukha, who is originally from central Ukraine, immigrated to Canada in 2008 and relocated to the Bow Valley six years ago.

The mother of two is sharing her story about ending an abusive relationship and the support she and her children received following a fire in early 2020, in which they lost everything.

“I had nothing. Not for my kids and not for me. I just had my car and whatever clothes we had on us. I was lucky I had my wallet on me with health cards and bank cards, but I lost all passports, all birth certificates and all my papers from Ukraine,” said Natalukha.

“My goal with the story is to show how much this community gave to us and that is why I chose the pair of shoes I did. After the fire I was left with one pair of shoes and they did not mean anything to me.”

Natalukha chose to write about a pair of winter boots she was given from one of her friends following the fire.

“The boots were given to me the next morning by one of my friends, but I didn’t know that until a few months later,” she said. “They became my favourite winter boots, and I really needed them at the time.”

Writing for the project became therapeutic for Natalukha, allowing her to confront her feelings and to move forward.

“I was holding myself in my space. I only spoke with my circle of friends,” she said. “At the beginning, writing was stressful. I had to push myself. It helped me to move forward – I was just holding like I was just living in my grievance. It helped me to get out of it. I have become more open and feel less fear about what happened.”

Rolfe spoke about the difficulty of being vulnerable when writing personal and emotional stories, especially those that have not been shared with many people.

“To put your own story on paper and to have it read first of all by me, their writing mentor, that alone takes an incredible amount of trust. But then to take it a step further to present it live on a stage in front of an audience of strangers – it can’t be stated enough just how strong and confident these women are in committing to this project,” said Rolfe.

For Natalukha, performing the story on stage is exciting. As a ballet dancer, she is comfortable being on stage and is eager to share her story. She is hopeful that by sharing her experience it may help someone else to leave an abusive relationship.

“I want to share this story because it is reality – it shows what can happen to family. Alcohol and mental stress can create a bad situation that destroy a family. I saw no solution. I did not know where to go. This community helped me to become free to move out of my situation,” she said.

“In Ukraine I don’t think I would receive this kind of support. I felt like this was my business – I had to deal with it on my own. But here people care and they wanted to help. I want women to know they should not be afraid to step away from an abusive relationship at any point.”

For Noriko Oshada, the Bow Valley’s local coordinator for the Shoe Project, the ability for the 10 women to share their stories after being delayed is thrilling, especially for Natalukha.

“Antonina is very special. She was quiet in this community. But she is a dancer, she loves to perform. She is naturally a confident, beautiful woman, but here because of the unique challenges of the project,  I hope this will give her the confidence to do whatever she wants,” said Oshada.

Oshada is a four-time participant in the project and is confident this year’s participants will have taken away some of the skills that she has learned through participating in the past.

“This experience has helped me tremendously in gaining confidence in thriving in the Bow Valley. I am so hopeful that these women got what I got out of this project,” said Oshada.

About the Author: Evan Buhler

Evan Buhler is an award-winning photojournalist and reporter who joined the Outlook in 2019. A native of Calgary, he previously worked in Salmon Arm, B.C.