During the war in Kosova, we were forced to leave home and become refugees in Montenegro. After a few months, money ran low for food and rent. There was no hope that the war would end soon.

We considered crossing the Adriatic Sea by boat, but being too scared of drowning like some refugees did, I abandoned that option. Leaving by land was the only choice. A few days later, we were at the bus station saying goodbye to my family. They hugged my two young sons as though it were the last time. I wiped my red, wet eyes, and we climbed onto the bus to Sarajevo.

I sat by the window with Fisnik, my one-year-old son on my lap. Beside me, my husband sat with Zenit, our older son. All of our belongings were in one carry-on bag at our feet. The kids, curious at the beginning, soon got drowsy and fell asleep. I was left looking through the window. It was a cloudy day. The road twisted and turned. Sometimes the sea came into full view; the muddy colour of angry waves terrifying me. I was glad I was on the bus instead of a boat.

After a few hours, the bus stopped suddenly. A few Serb policemen came on board. They had a fierce look in their eyes and were holding automatic guns. This was Bosnia’s Serb-controlled territory. Dead silence on the bus. The police ordered a few people off the bus and into their cabin beside the road. Someone whispered that they were strip-searching in that cabin. After a while, the police returned and shouted, “Everyone gets out quickly! Leave your belongings on the seats!” 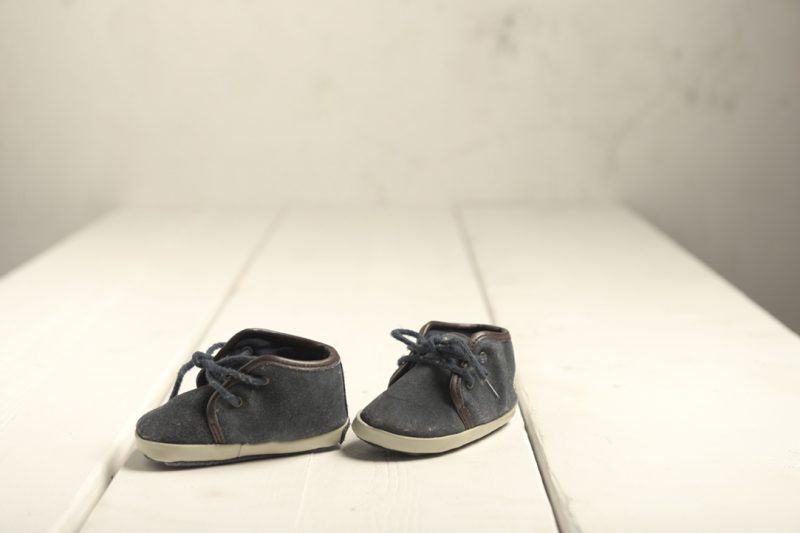 “Where should I hide it? In my underwear, in my baby’s diaper, under the seat? No, no, no. My hands shook as I put my son’s soft leather shoes on his feet.”

That was when terror choked me. The police could do horrible things: rob, rape, even kill. On my chest, I wore a pouch which my mom had hand-sewn for me. It contained all of our money – our treasure chest upon my chest. It was the survival money sent to us by Besa, my sister from New York.

Careful not to draw attention, I removed the pouch and held it tight in my sweaty palm. I was trembling, my brain firing ideas like bullets. Where should I hide it? In my underwear, in my baby’s diaper, under the seat? No, no, no.

My hands shook as I put my son’s soft leather shoes on his feet. An idea arose. I inserted the pouch inside a sock and slipped it into one shoe. Miraculously, it fits perfectly! I put the other sock in the other shoe, then tucked in the laces and left the shoes on the seat. I was the last one to get off the bus. Outside were more policemen with guns. All the passengers huddled fearfully. Then the police got on to search for the bus. I held my son in my arms. I don’t know if it was from the cold or fear, but I was shivering. My teeth were clenched. I had taken a huge risk.

After a while, we were allowed back on the bus. I couldn’t wait to check if my son’s shoes were still there. As I came down the aisle, I saw my bag open on the seat, the kids’ clothes spilling out. No shoes in sight.

My heart sank in despair, but as I put the clothes back in the bag, I saw the shoes were underneath. I quickly grabbed the shoes and squeezed them, and felt the pouch inside. Goosebumps of joy covered me. I kissed both my sons, and with wet eyes and a smile, I whispered to my husband, “We are safe.”

Venera Loshaj-Balaj is an Albanian from Kosova. She has a degree in Chemistry from the University of Prishtina. The war in Kosova forced her and her family to become refugees in 1998. In recent years she has found her passion for painting and writing.