In Memory of Aaron Berhane

By Katherine Govier, novelist, founder and Board Chair of The Shoe Project

One of the tragic ravages of Covid was the death, at 51 years old, of Aaron Berhane, journalist, professor and a brave man born in Eritrea. He was a friend of mine, and of The Shoe Project.

When I first met him, Aaron was in charge of tech at Sheridan College in the program Journalism for Foreign Trained Writers. Once we met for coffee and he took me for a walk through the main floor of Honest Ed’s where there were various kiosks against the wall for immigrant services – the newspaper he founded for Toronto’s Eritrean community, Meftith had one. I felt his pride and his sadness. He was lucky to have escaped in 2001, but his family was left behind in Eritrea. It had been a decade, and he was thinking he would have to work with smugglers. Many other independent journalists were arrested, and most died horrible deaths in jail. At least that uniquely Torontonian emporium, Honest Ed’s, was a bit of a happy place for him where he might meet his countrymen or sympathetic souls. 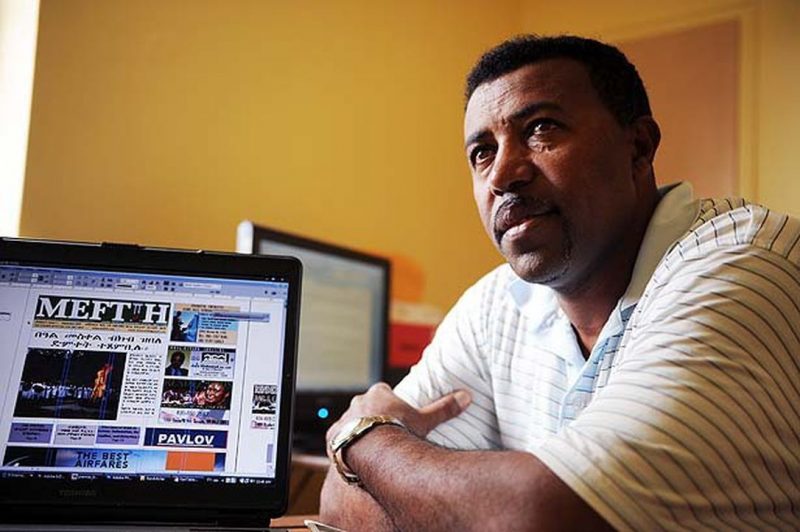 When Aaron’s family arrived, Milliete and Freweini joined The Shoe Project for its first workshop. It was 2011: they had been smuggled out through Sudan. Freweini was a high schooler and wrote a story about it. Milliete wrote a beautiful story too, about the “shida”, Eritrea’s iconic plastic sandals.

Aaron’s story emerged more slowly, although by now many have heard of his brushes with death and his success in building a life in Canada while never forgetting the struggle of the Eritrean people.

Over the years Freweini has performed with us. She graduated from science at the University of Toronto and began to work in a hospital. She married and had her first child.

Aaron told the full story of his escape in separate moments over the years. Once while having coffee at Aroma, he told me that he’d been warned an arrest was coming and had hidden with a family member in Asmara for months. That you could trust no one, maybe not even your church, because of the government.  We discussed his using TSP stories in his classroom at George Brown. And last summer he called to ask advice about getting an agent for his book contract with Dundurn Press.  I wonder what will happen to it now.

At his death seven weeks ago, his family was devastated. There have been tributes from his colleagues in the Writers in Exile group of PEN Canada, an obituary in the Globe, and many personal expressions of grief for this wonderful man.  We at The Shoe Project make our tribute to Aaron by presenting the stories written by his courageous wife and strong daughter. While grieving with them, we wish the family joy with the birth of Freweini’s second child.

Please follow the links to our interactive map. Select the country Eritrea in the dropdown menu. Click on pins to read the stories.

Editor calls out to Eritreans

By Brad Wheeler, The Globe and Mail